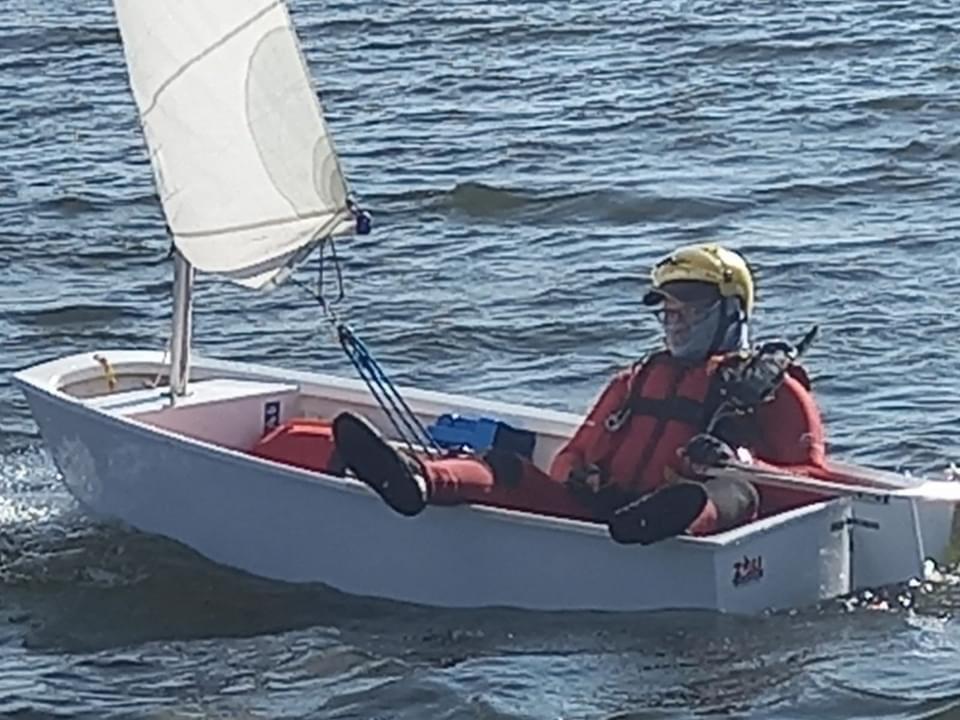 Members from Witbank Yacht Club seized the opportunity to be a part of The Little Optimist Global Challenge, and what fun they had!

“As per my telephone call with Greg the other day, herewith a short report on our Witbank Yacht club “Littleoptimistglobalchallenge” fundraising event.

The idea started when I read about the challenge. Due to a cancelled event on our calendar, I suggested to the committee to substitute the event with this challenge. It was agreed and we were allowed to use the 4 club Oppies in storage. The date was set for 10 October 2020.

Other members became interested and we managed to get 9 guys and 1 girl to enter. All of us are adults and most have never sailed an Oppie before!

The weeks leading up to the event were a mass of questions and concerns, mostly about:

FAQ: How do you fit into this bathtub?

Answer: Not sure? Especially Alex who is six foot something tall.

FAQ: Since we all keelboat sailors, how the heck do you keep it upright?

Answer: Doesn’t it have a keel?

My apprehensions of this event were in vain as the day progressed. The NSRI Guys made up an excellent target board in the bar. Since we had no sponsors, we sponsored each other and convinced spectators to contribute during the day.

We had tons of fun and many funny incidents.

Stephen Price was the first and only to sail “Tokolosh”, a very old plywood boat. Halfway in his 5 km stint, the boat started leaking and he barely made it to shore before sinking. It seemed the wood glue perished and the boat was literally coming apart at the seams. After one of the other boats came in, he managed to complete his stint but capsized that boat as well.

Alex Garoufalias is too tall for this boat. He could not sit in the boat and sailed standing up during his stint. He is also known as “The pirate” and can be seen in one photo trying to hijack the Holiday. The children on board were more fascinated than frightened.

His lovely wife, the only girl brave enough to enter, sailed her stint but was caught in an afternoon gust. After being blown off course towards the far end of the dam, the boat lost the sprit and thus had to be rescued by NSRI.

Max Petzold entered but hurt his leg before the event. Since he was on crutches, his twin Brother, Moritz offered to sail on his behalf. He too nursed an injured knee but managed to keep his leg hanging over the gunwale.

Our 2 NSRI participants were last to sail. They hopped aboard in full kit adding to the weight. Corbin managed to keep his boat afloat but Travis was not so lucky. The overweight boat capsized regularly and he spent more time bailing than sailing.

Besides the sailing, we had a Holiday yacht, a motor boat and NSRI to lend support.

Those on shore applauded us “Toppies in Oppies” and convinced spectators to contribute to the fundraising. All in all, it was an exciting day that was enjoyed by all.

Thank you for giving us an opportunity to participate in this event.

SAILING IN A TIDAL POOL …….whaaaaat?

All in the family!